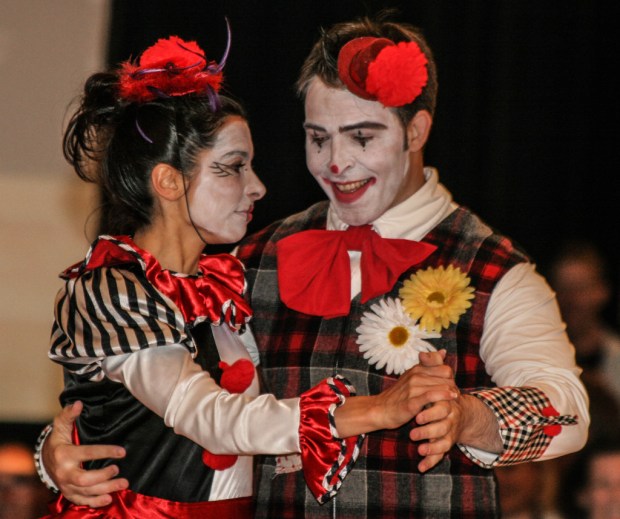 When Albert Einstein met Charlie Chaplin, Einstein said,“What I most admire about your art, is your universality. You don’t say a word, yet the world understands you!”

Silent film star Charlie Chaplin epitomizes the power of nonverbal communication.  Think about it for a moment: he mastered the use of facial expressions and body language to convey messages in a medium where words were not an option.  He did so to such a degree that in 1998 – well into the age when words, music, and CGI could tell the story in the movies – film critic Andrew Sarris called Chaplin “arguably the single most important artist produced by the cinema, certainly its most extraordinary performer and probably still its most universal icon”.

Chaplin can help us understand what we were talking about last week: the importance of showing up.  When you show up there will be a language spoken, even if words are not.  As in Chaplin’s day, it will be the language of your body. Experiences and feelings are expressed by your movements, your posture, your silence, and your stillness.

Communication can occur without words or sounds. It comes from nonverbal reactions, from pupils dilating to a foot moving back and forth. It can be seen in the tension in your shoulders or mouth. You show who you are and how you feel by the way you walk, stand, and hold your head.

For example, I worked with a young woman who said she knew when her mother was in a bad mood because she would frown.  No words were needed – the daughter just knew. She felt that she was the cause of the frown, but was too afraid to ask. As an adult, she is afraid that she is the cause of other people’s unhappiness.

Even when words are used, nonverbal communication can validate or contradict what you are saying. You say yes, but shake your head no. What is the real answer? You might not even be aware that on an unconscious level you do not want to say yes.

The need to be seen

We all need responses from others.  That witness teaches us how to define and regulate our feelings.  In therapy, you need to have the feeling that you are being seen and that this person with whom you are working really understands you.

Regardless, of how many words are exchanged, the depth of the message is delivered by non-verbal responses and the unconscious mind. The messages from the unconscious are conveyed by the small, often unnoticed nonverbal cues. It is a powerful way to convey meaning.

The beginning of communication

From birth, infants engage in nonverbal patterns of communication with their mother or main caretaker. This communication involves olfactory, tactile, auditory, visual and motor systems. These patterns continue into adulthood.

The “good enough” mother communicates with her baby by mirroring his/her nonverbal behavior. The baby learns to respond according to the mother’s reaction. The mother and baby share interest in one another. An attachment is formed. The baby begins to form a sense of self.

With shared interest and communication the baby begins to expect certain responses from the mother. If the mother is attuned to the baby, then her responses will lead the child into an adulthood with a sense of safety and belief that the child is good.

If the mother is not attuned to the baby, then the expectations will not be met.  That will lead to a belief that the world is not safe and the child is bad. As adults, the cues from other’s behavior will be misinterpreted as dangerous, hurtful, and rejecting. Shame develops, and the true-self is hidden and unknown.

The hormones and chemicals that the brain produces contribute to nonverbal communication. On an unconscious level we are told to run, hide, fight or freeze. On an emotional level it will cause us to hide our feelings and cope with the immediate situation.

When the nonverbal behavior is noticed and addressed, the body is soothed along with the feelings.

I observed a young boy who was talking excitedly. Suddenly, he had a distressed look on his face. His eyes  turned to the floor, he lost his smile, and stopped talking. It was clear that his mood had suddenly changed, and that he was in some type of distress. Immediately, his mother’s focus turned to what was troubling him and what he might need.

He had not said any specific words, or even drawn attention to himself. The only thing that changed was his non-verbal cues. Yet, it was clear he was in distress. As an observer, I was drawn into his mood  because of my own physical response to him. I felt distressed and concerned even though it was not  my place to take care of him.

This is an example of how therapy works when it hurts too much to talk. The non-verbal clues you give will reveal a lot of information about what is happening inside. The child I was observing was unable find words to describe what was bothering him.  However, his mother was attuned to her son and realized he needed attention.

When you enter therapy and cannot talk about what is hurting you; when you hit a place in therapy where you cannot verbalize your pain, communication is happening. There is still help for you.