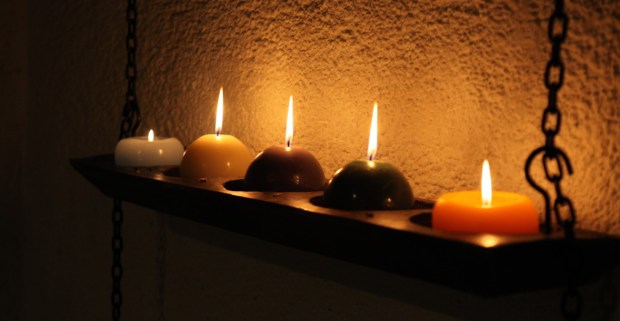 In ancient times, numerous beliefs and rituals were based on astronomical events. Many traditions that  started then are still celebrated today.  Tonight – the Winter Solstice – is one of those occasions.

Winter Solstice is the longest night of the year.  Throughout much of history, societies were built around the amount of daylight available.  The shortest day of the year, which comes with the longest night, was immensely important.  It meant the harvest had passed, and they would live on stored goods until the spring.  During the following months there would be hardship and even starvation for some.

In the time before artificial lighting, the darkness was deep and profound.  Bonfires would roar in the night and candles would burn. Rituals of darkness and light were powerful and deeply meaningful.

Most of the celebrations were centered on the light as a reminder that growth and harvest would return.  The end of the longest night meant that days would get longer and nights shorter; that the light would come once again and they would be safe.

In cultures that used a cyclic calendar, the new year began on Winter Solstice. They saw it as the time when the year was reborn. It was the end of the old, the beginning of the new; the cycle of life began again, and faith in the future was renewed.

These themes still live in the cultures of the world and can be seen in the celebrations connected to this time of the year. Most cultures have a tradition, festival or event that represent the ideas of darkness and light, death and new life, and it tends to occur near the Winter Solstice.  Most of us know Christmas and Hanukkah, but were you aware that Wiccans celebrate the Solstice itself? That’s where we get our traditions of Yule and wassail.  Or that Hindus have celebrated the winter solstice for so long that their holiday has slid  into January with the invention of calendars?

These celebrations are about hope.

All of these holidays reflect the ancient traditions of marking endings and beginnings, darkness and light. Rituals reflect and emphasis on the coming prosperity after the darkness.There was celebration for the bounty of the harvest past and sacrifices to gods for prosperity in the coming year.

In modern times we call it “commercialism”.  Today, some businesses generate most of their livelihood from this time of the year, and without it they may go out of business, or “starve”. While it is true that there is way more attention giving to this aspect of the holidays than may be necessary, but it was and is a vita part of the economy and survival of our community.

Carl Jung called the continuing of themes throughout history the “Collective Unconscious”. Spiritual traditions might call it “The Spirit or God”. However, you label the phenomena, these themes live within each of us. They are important milestones to mark and celebrations to have.

A time of Reflection

The solstice is a good time to look back in our personal histories and reflect.  We can, and will, find events during this time of year that hurt us, made us angry, or felt unfair and unjust. Are you having trouble finding the gifts to you and others in the season? Find help, talk to a friend. Listen to someone else’s story and borrow their experience to make your holiday feel a little better.

Don’t miss the point of the season by focusing on what feels negative to you. The holidays offer the possibility of finding a deeper meaning that is beyond your experience. For help finding it, call me at (919) 881-2001.