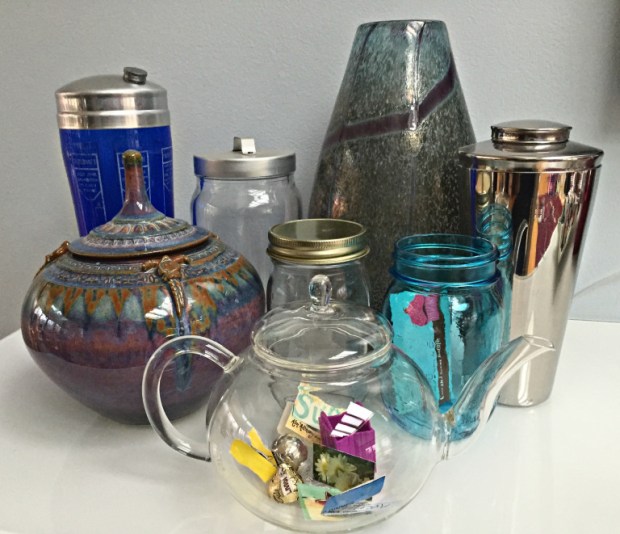 Now that Christmas Day has passed, we are in the period of time when everyone is looking toward the New Year.  Once again there is hype and an exaggerated focus on parties, fun, resolutions and having the “perfect” person or activity with whom to share the celebrations.

In short, it is another opportunity for elevated expectations and disappointment.

A friend of mine gave me a great idea for beginning the year. For the last decade, she starts New Year’s Day with a cup of coffee and her Memory Jar.  She settles into an easy chair and reads the small pieces of paper contained inside.

Throughout the year, anytime she accomplishes a goal, is successful, or something happens that makes her happy, she writes it on a piece of paper and places it in her Memory Jar. It is much like the one sentence journal that Gretchen Rubin of The Happiness Project suggests.

My friend does not make resolutions or plans, does not set goals and has no expectations for the year. She simply reads the memories of the year gone by that she has recorded for herself.

On New Year’s Day she reminisces, she laughs and smiles. She enjoys being with herself.

My friend is a single woman whose mother died several years ago. Her sister lives in California, and her beloved dog is no longer with her. Her life is full, she has many friends and interest and has many invitations during the holidays. However, she chooses to spend the first morning of the New Year with herself.

She starts the year visiting with her true self and all she has accomplished in the last 12 months.  The Memory Jar speaks in her own voice, reminding her of how full and rich her life is and will continue to be.

How to Start a Memory Jar

Starting your own Memory Jar is simple, and here are three suggestions to get you started:

As the year goes forward, add to what you have started.  Don’t limit yourself to words and paper – if a photograph says it faster, drop a picture in the jar.  The same with mementos, souvenirs, anything that has meaning for you and your true-self.  Next year, you will have a delightful companion with whom to share New Year’s Day 2017.